Home » Stories » For Teens in Foster Care Adoption is a Lifeline

For Teens in Foster Care - Adoption is a Lifeline

From Foster Care to a Forever Home

Approximately 20,000 youth will age out of the foster care system and be left without a family when they turn 18 or 21, or when they finish high school (depending on the state).

When you hear the word adoption, what comes to mind?

For some, it may be thinking about a missionary at your church who has spoken about the need for orphans worldwide to find homes. When it comes to adoption, many of us don’t think about the modern-day orphans in foster care across the U.S. – especially teens.

Children and teens enter foster care through no fault of their own: because they have been abused, neglected, or abandoned and are unable to continue living safely within their families. And yet each year, approximately 20,000 youth will age out of the foster care system and be left without a family when they turn 18 or 21, or when they finish high school (depending on the state).

DARIEN COULD HAVE BECOME A STATISTIC

Darien, a 17-year-old from Harrisburg, had every reason to become another statistic in the foster care system simply because of his age.

In and out of multiple foster homes, the disappointment of two failed adoptions, Darien lived with a family for three years before they disrupted the pending adoption. Through no fault of his own, he was then living in a detention center for kids on probation, and yet, he had not committed a crime. So why was he living there? Because there was nowhere else for him to go. He was in a detention center because the people surrounding him had failed him. The system failed him. Darien was on hold, waiting for someone to give him hope, stability, love, and acceptance.

A Heart for Older Kids

Then a young couple from Cranberry Township, PA looking to adopt had decided to begin that process. Travis and Maranda Karenbauer initially wanted a child that was eight to 11 years old, but God had other plans. After babysitting an 8- & 11-year-old, Travis and Maranda began to realize that age group wasn’t for them. Just when we think we know what we want in life, God is making other plans and in this case, was showing The Karenbauer’s little by little that He knows what’s best. Throughout that time, Maranda says, “God just kept making our hearts more for older kids.”

Travis, a youth pastor at the time, and his wife, Maranda, a youth volunteer at their church, both knew that because of their faith, God was working on finding the right foster child to fill their hearts and be part of their family. They were nearly finished with signing papers in order to be able to adopt when their Bair Foster Parent Recruiter reached out with a referral. It turned out to be Darien. He was not eight years old or even 11 – he was 17. An age that the couple had never considered.

“I felt like our only answer was yes”, Maranda recalls.

I Will Drive 221 Miles For You

When it finally came time to meet Darien, they would do anything they could to bring him halfway across Pennsylvania. A few pieces of paperwork at his location meant delays in transporting him to see his new family. Travis ended up driving the 221 miles to the detention center himself to pick up Darien. Love knows no barriers and, in this case, Travis and Maranda wouldn’t let anything stop them. 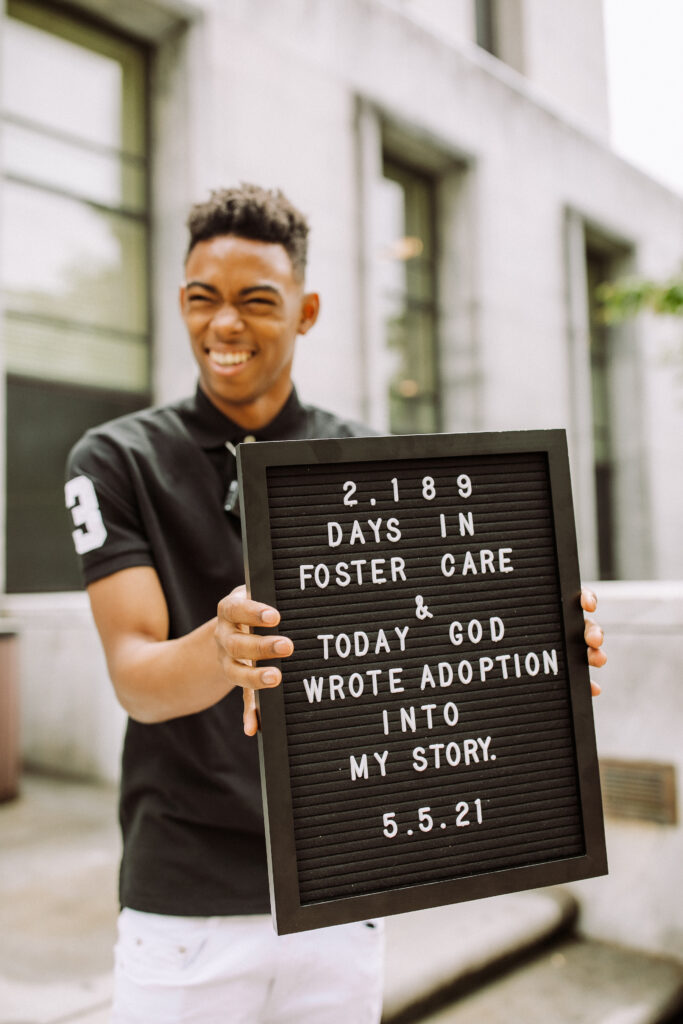 From Foster Care to a Forever Home

After 2,189 days in foster care, on May 5th, 2021, Darien was officially adopted by The Karenbauer’s. “It just feels like he gets to live”, Maranda says. It’ll be a day they remember forever, happy tears and all. After nearly six years in foster care, Darien has found his forever home surrounded by love and support.

Since Darien’s adoption, The Karenbauer’s say they’ve felt lighter and Darien feels like the weight he has been carrying is gone. A gentle reminder that teens need love, a family, and stable home – well past their teen years is a promise that the Karenbauer’s have committed to with Darien. Imagine all the other teens waiting to experience the same hope, joy, and security.

Teens like Darien make up less than 10% of all adoptions and are some of the least likely to find a foster home. We need your help to give teens the hope, love, and future they deserve.

If you’re interested in opening your heart and home by becoming a foster parent, let us know by filling out our online contact form and someone from your local office will be in contact with you directly.

If you are not in the position to become a foster parent, consider donating securely online, by check, or by calling 800-543-7058. With your prayers and financial commitment, children and teens who have suffered emotional trauma can find healing and become our future leaders.

To follow Darien’s story further, visit “Take a Chance on Me” produced by the Archibald Project.

Every year, more than half a million children are the victims of abuse and neglect.

When these children enter foster care, we provide foster families with the support they need to turn tragedy into hope.